Bhabesh Chandra Sanyal commonly known as B. C. Sanyal (April 22, 1901 — August 9, 2003), the doyen of modernism in Indian art, was an Indian painter and sculptor and an Art teacher to three generations of artists. During his lifetime he not just saw the partition of the Indian subcontinent three times, 1905, 1947 and 1971, but also witnessed 20th century Indian art in all its phases. His notable paintings include The flying scarecrow,Cow herd, Despair and Way to Peace, which depicts Mahatma Gandhi with a Hindu and a Muslim child.

He was awarded the Padma Bhushan in 1984, and India's highest award in visual arts, theLalit Kala Akademi Fellowship for lifetime achievement by Lalit Kala Akademi, India's National Academy of Fine Arts in 1980. 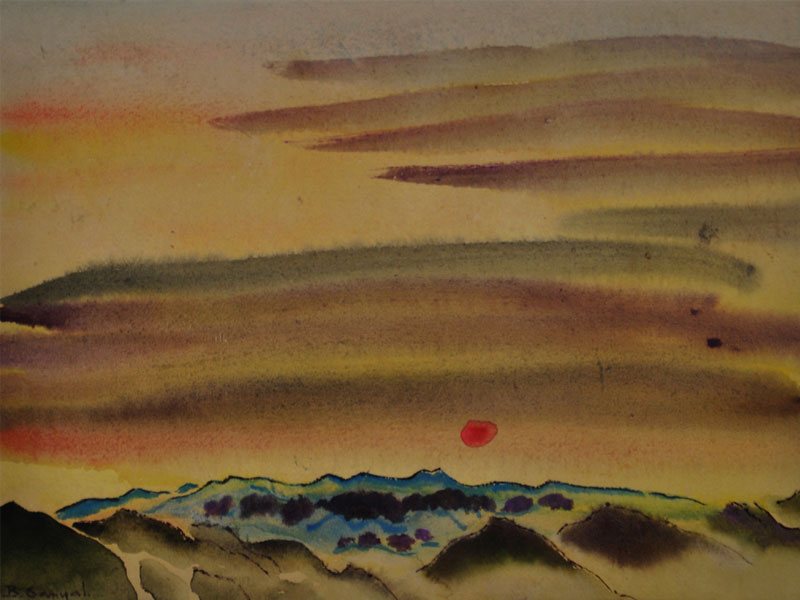 Bhabesh Chandra Sanyal's genius was recognized by the Indian government which awarded him duly. The painter, sculptor and art teacher received a number of awards towards the later part of his career:

Lalit Kala Akademi Fellowship for lifetime achievement by the National Academy of Fine Arts in India in the year 1980.

An honorary citizenship of Baltimore from the US government in the year 1989.

Sankar Dev Award by government of Assam in 1999.

Special postage stamp issued by Indian government to observe the centenary year of B C Sanyal’s birth in 2000.

IGNCA, New Delhi released a DVD on B. C. Sanyal along with Elizabeth Brunner in Great Masters on April 22, 2001.

Special exhibition with more than 170 artistes participating was organized on April 22, 2001 by IGNCA as part of the centenary birthday celebrations of B C Sanyal.

Bhabesh Chandra Sanyal died on August 9, 2003 in New Delhi aged 103. He remained active till the last years of his life practicing lithography even at the age of 101. It was a minor short term illness that took away B. C. Sanyal's life in the year 2003. The artist was survived by his wife Snelata and their daughter Amba Sanyal.

1920: Joined the Serampore College of Art and stayed for six years first as student and then as a teacher.

1929: Got employment with Krishna Plaster Works.

1936: Dismissed from the Mayo School of Arts in Lahore by British.

1947: Set up the Delhi Shilpi Chakra in New Delhi.

1949: Conducted an exhibition at the Salon de Mai in Paris.

1953: Participated in the Venice Biennale.

1953: Became a professor and head of department of art in Delhi Polytechnic.

1960: Became a member of the All India Fine Arts and Crafts Society and secretary of the Lalit Kala Akademi.

1989: Became an honorary citizen of Baltimore, US.

1999: Bestowed with Sankar Dev Award by government of Assam.

2001: IGNCA released DVD on B. C. Sanyal and Elizabeth Brunner.