Jamini Roy was born on the 11th of April 1887 into a moderately prosperous family of land owners in a village called Beliatore in the district of Bankura in Bengal . When he was sixteen he was sent to study at the Government School of Art in Calcutta. He was taught to paint in the prevailing academic tradition, drawing Classical nudes and painting in oils and in 1908 he received his Diploma in Fine Art.

However, he soon realised that he needed to draw inspiration, not from Western traditions, but from his own culture, and so he looked to the living folk and tribal art for inspiration. He was most influenced by the Kalighat Pat,Kalighat pat was not a person but a style of art with bold sweeping brush-strokes. He moved away from his earlier impressionist landscapes and portraits and between 1921 and 1924 began his first period of experimentation with the Santhal dance as his starting point. 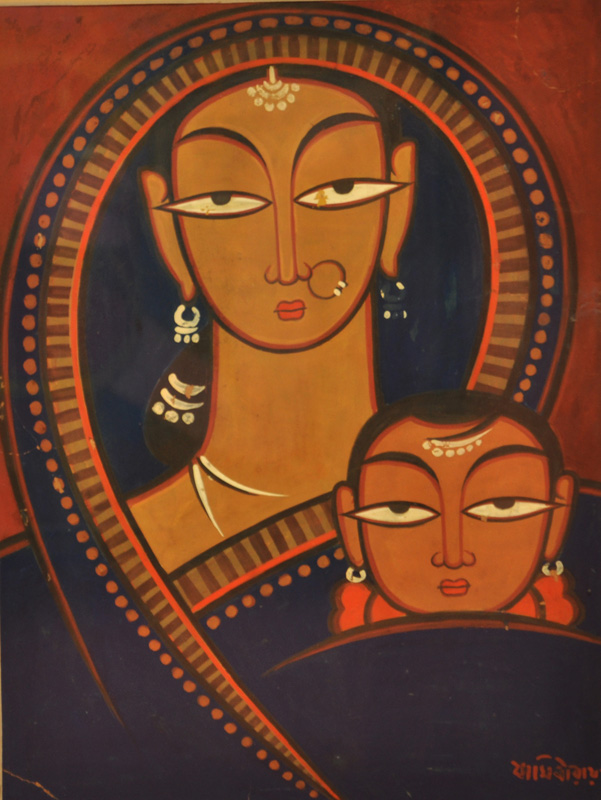 His new style was a reaction against the Bengal School and Western tradition. His underlying quest was threefold: to capture the essence of simplicity embodied in the life of the folk people; to make art accessible to a wider section of people; and to give Indian art its own identity. He was awarded the Padma Bhusan in 1954. His work has been exhibited extensively in international exhibitions and can be found in many private and public collections such as The Victoria and Albert Museum, London. He spent most of his life living and working in Calcutta. Initially he experimented with Kalighat paintings but found that they had ceased to be strictly a "patua" and went to learn from village patuas. Consequently his techniques as well as subject matter was influenced by traditional art of Bengal. Jamini Roy died in 1972. He was survived by four sons and a daughter. Currently his successors (daughters-in-law and grand children and their children) stay at the home he had built in Ballygunge Place, Kolkata. His works can be found in various galleries across the globe as well as in his home.It is evident that his followers and successors copied many of his works with minor variations intentionally or unintentionally there has been a problem with the identification of the originality of his works.