Born in Amritsar, R. N. Pasricha graduated in science and was forced to work as a typist to earn a livelihood, but it was painting that drew him, and he enrolled in night classes in art. Close association with artist Abani Sen helped him acquire a better understanding of painting techniques.

Pasricha’s early works mostly consist of sketches done in sensitive black lines that communicate a scene, a story or sometimes just a moment. Primarily a landscapist, his preferred medium was water colours. He painted several landscapes in and around Delhi, but it was the Himalayan ranges that became his theme and muse for over 50 years, inspired by the works of Nicholas Roerich.

Working from memory, he recreated his landscapes with different kinds of brushstrokes and arrangements of lines and dots. He balanced his water colours using various warm and cool tones to delineate individual objects. While his early works and sketches are distinctly academic in approach, the gradual flow of abstraction into his works is discernible. Besides water colour, he painted with gouache and the impulse towards abstraction comes through in his cubistically painted houses in several landscape works.

Pasricha received mention in the Limca book of records, 1997 and 1998, for being the only artist to have climbed as high as Kamet and Mana peaks and painting them ‘plein air’ on the spot. The records also noted his painting of sixty-five Himalayan peaks. 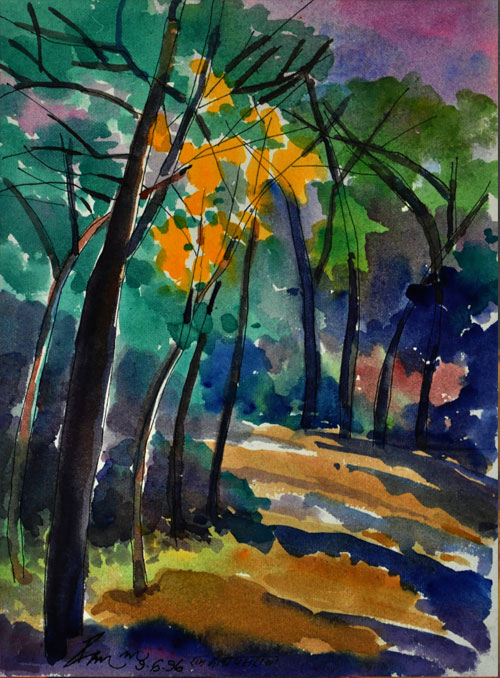